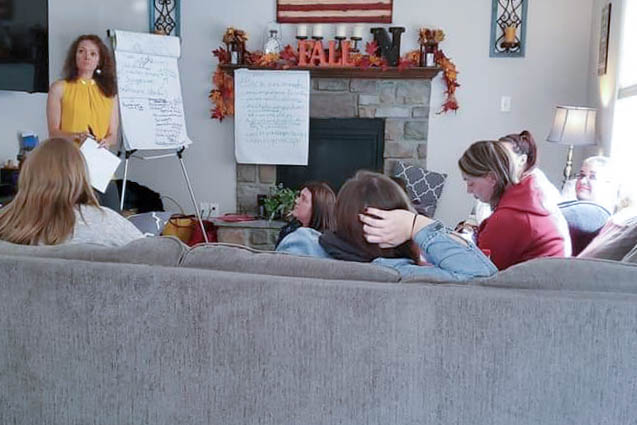 The Dauphin MST team gathers at a team member’s home for a booster meeting prior to COVID-19.

A Story of Hope

A youth was pending release from juvenile detention for the second time in a year after continually using drugs, running away from home, and skipping school. Juvenile probation, children and youth, and her parents all expressed concern and doubt about her ability to succeed within the community upon release. But once released and recommended for MST, our therapist quickly began to instill new hope with the youth’s family.

The therapist began by contacting the family daily, sometimes multiple times a day between face-to-face sessions, to provide support and reinforce the family’s efforts. They assisted the family in developing and maintaining appropriate supervision, expectations, rewards, and consequences for the youth to attend school, pass drug tests, and spend time with positive, parent-approved peers. They provided further support by sharing these interventions with probation and getting their perspective and input.

After twelve full weeks of this intensive process, the youth and her family had made remarkable, sustainable changes. She had obtained part-time employment, regularly participated in programs at a local YMCA, and had gotten through at least seven consecutive weeks without engaging in truancy, running away from home, or abusing substances. She and her parents expressed not only their thankfulness for the MST program but also their renewed hope and anticipation for her future success.

Our MST program works with youth in the juvenile justice system and in Children and Youth services with the primary goal of either avoiding having youth removed from the home or helping them transition back home after an out-of-home placement. Our MST therapists work in homes, schools, and communities to offer researched-based, direct therapeutic intervention to youth who are at risk for mental health disorder or are involved in the juvenile justice system. The program’s approach is family-driven, so our MST team attempts to treat youth in their natural environment and involves their families in their treatment as much as possible.

Our Dauphin MST team makes up a small part of our Dauphin County Children’s Services office, comprised of one administrator and three therapists. Because of their size, the team has developed a family-like relationship and have been able to connect on a personal level, share skills, and build each other’s clinical knowledge. They even have a quarterly booster where all of our MST teams get together at someone’s house to learn more about a topic and build their professional expertise.

Starting in 2005, PCS was one of the first providers in Pennsylvania to offer MST under a managed care model. In 2013, the Dauphin County MST program was named the best community-based program in the juvenile justice system in all of Pennsylvania. The MST motto, “whatever it takes,” encourages our staff to live out our mission every day and prevent youth from entering the prison system.

For our team, the MST approach has proved to succeed where other methods have failed. Because of its intensive approach and focus on outcomes, PCS has consistently been able to have ninety percent of at-risk youth enrolled in MST to avoid out-of-home placement. Part of this is because of our team’s ability to instill hope in the youth and family and provide an action-oriented approach to changing a pattern of behavior. By addressing the youth’s overall well-being and changing systemic factors that contribute to their at-risk and/or delinquent behaviors, MST has been able to change lives one family at a time.